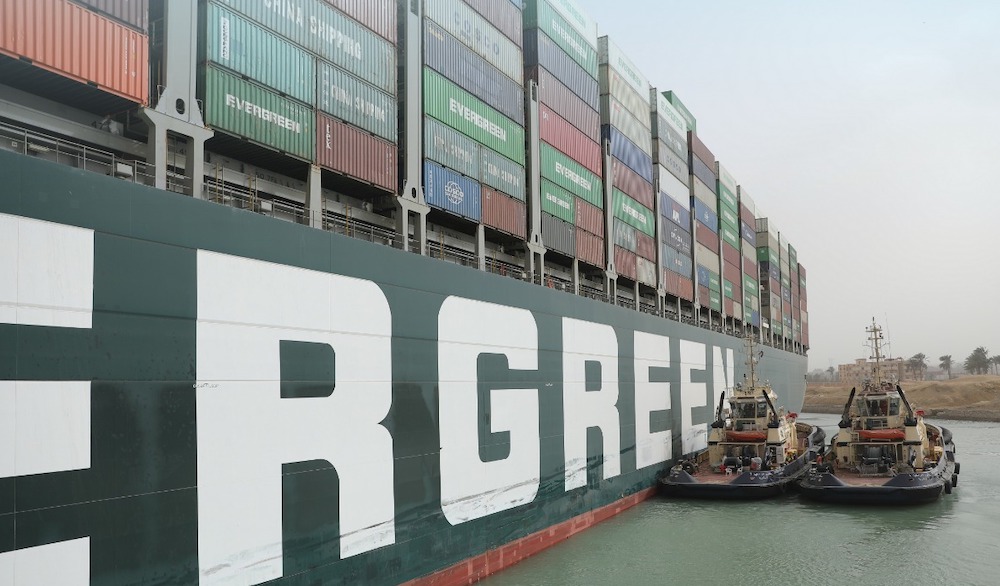 With the Suez Canal blocked by a container ship stuck sideways, efforts are on to free the ship, as dredging crews work to remove massive amounts of sand and tugboats set to be pressed in on Saturday to help with the salvage operations.

Dredging crews are engaged in digging away in the sand in a bid to free the stuck container ship, and restore operations over one of the busiest shipping routes. The container ship Ever Given, has been stuck since Tuesday causing a traffic jam with more than 200 ships waiting for the waters to be cleared.

The Ever Given with a capacity of 200,000 metric tons, nearly a quarter-mile long has run aground near the Egyptian city of Suez, around 3.7 miles to the north of the southern entrance of the canal. The Ever Given is stuck in a section of the canal measuring 985 feet across its eastern and western banks. The ship is aground with the bow on the eastern bank and its stern on the western bank. According to the owners, the ship drifted sideways pushed by the strong winds of a sandstorm with the containers stacked on the deck possibly acting as sail.

According to Bernhard Schulte Shipmanagement, the company managing the vessel, a ship refloating attempt, Friday failed. CNN reported that the U.S. Navy had offered assistance.

According to AP, at least 280 ships with a variety of cargo on board including cars, oil, grain were waiting at the southern and northern entrances. AP added that data firm Refinitiv which carried out an analysis said around 300 ships were on course to the canal in the next 15 days.

In a bid to reposition the ship at least 10 tugboats would attempt to refloat the vessel. While there is disagreement among authorities over how long the canal would remain blocked, Shoei Kisen, the owner of the ship, it aimed to free Ever Given by March 27 night.

On March 26, Agence France Presse was told by an Egyptian presidential adviser that resumption of traffic would take 48 to 72 hours. However, according to the CEO of a dredging company, the operation would likely take weeks.

Amid uncertainty over resumption of normal operations, some shippers had been forced to reroute their ships around Africa’s Cape of Good. This is expected to delay arrivals at destination ports by weeks besides running risks of piracy. Some had approached the U.S. Navy seeking help to secure operational security.

According to commentators, 120-mile-long canal formed a vital trade link between the Red Sea and Mediterranean Sea and carried 2.5% of the world’s oil as also 10% to 12% of commercial shipping. According to a German insurer, delays could hit global trade to the tune of $6 billion to $10 billion a week, Reuters reported.

According to GlobalSecurity.org the canal was economically and strategically, among the most important of the world’s waterways.

The Suez Canal, a sea-level canal opened in 1869 and on an average 50 ships transit the canal daily. Ships normally take 13 to 15 hours for crossing the canal end to end. It had been widened over the years, with the latest project in 2015 costing $8 billion.

The canal is operated by Egypt, through the Suez Canal Authority which earned a revenue of $5.6 billion in 2020 from it.  The Ever Given built in 2018 is operated by Taiwan’s Evergreen Marine. The vessel can carry 20,000 20-foot containers, Reuters reported adding it transported cargo between Europe and Asia. It has a 25-strong crew.

Meanwhile, as attempts to free the vessel continue, the world is watching and waiting for the blockage to be cleared at the earliest.